July 26, 2018 Uncategorized Comments Off on PodChatLive 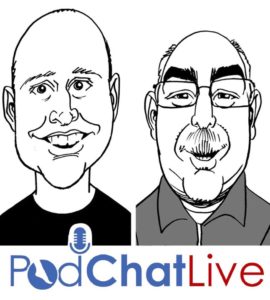 PodChatLive is my latest project. This is a weekly livestream that I co-host with Ian Griffiths from Sports Podiatry Info in the UK. They are generally streamed live early in the morning on a Friday here in Australia and in the evening in the UK. The livestream goes to our Facebook page(please like our page). Later it is added to our YouTube channel (please subscribe to us) and as a podcast – its is also added to our website. We have a different guest on each week and chat about things with them. We are really happy with the numbers that watch us and give us such positive feedback.

You can get the audio podcast version here.

Fibromyalgia and the Foot

March 3, 2015 Uncategorized Comments Off on Fibromyalgia and the Foot

There is no doubt that fibromyalgia is a miserable condition to have. Those with it have a poor quality of life constantly dealing with the chronic pain. They are always looking for a “cure”. This makes them vulnerable to every quack that comes along offering a cure. I recently wrote a couple of pieces (here and here) on the book by a podiatrist claiming to have found the cure for fibromyalgia and that cure is in the feet. I don’t think so.

The book is full of pseudoscience and made up stuff and presents no evidence to back up the claim except for a few anecdotes. That is not good enough these days.

The Myth of Homeopathy

October 11, 2013 Uncategorized Comments Off on The Myth of Homeopathy

Homeopathy does not work.

Every single randomized controlled trial that is properly controlled and with rigorous methodology says it does not work. the only studies that shows is work either do not have control group or some other flaw that limits its interpretation. Every single systematic review of the evidence has also concluded that it does not work.

Physiologically it is impossible for homeopathy to work as the dilutions applied are so dilute that any one sample of the “medicine” will have no active ingredients.

No ifs; no butts; homeopathy is nothing more than an expensive placebo. It does not work.

The 100 Up Running Drill

September 5, 2013 Uncategorized Comments Off on The 100 Up Running Drill

This has been an interesting story to follow. The 100 Up drill was a drill used by Walter George in the 1800’s when training for the mile race. Recently the drills was “rediscovered” and there was a lot of buzz about it on the web, but very little critical appraisal of it – just a blind acceptance of it. There are a couple of books on it; there is even a website devoted to it; and it keeps coming up on forums and on blogs. I originally wrote about it and the fuss at Podiatry Arena and more recently at PodiaPaedia. Interesting to follow the blogosphere on this one.

August 22, 2013 Uncategorized Comments Off on Poking fun at Chi Runners

There are many different running forms or techniques out there such a natural running, pose running, evolution running, barefoot running and Chi running. Those into chi running are the most easy to ridicule and poke fun at as they get it wrong so often. They make up stuff to support there particular approach to running; they lie about the research; they criticize research they don’t like for the most trivial things (eg the sample size is too small when its not), yet blindly accept other research without criticism when its suits their agenda (eg see this one with a sample size of only 6!). I have done a previous rant about chi running and ridiculed the latest chi running book. I even did a Chi running course to learn more about it!

Chi running technique may or may not be a good way for some people to run. But if it is, the fan boys that promote it have to stop making fools of themselves with what they claim and opening the door to being ridiculed!

Been writing about the natural fallacy

May 18, 2013 Uncategorized Comments Off on Been writing about the natural fallacy

The natural fallacy has been coming up a lot lately. The fallacy is that marketers use the appeal to nature to imply that something is better because it is natural. The implication is that because it is natural, then this means that it is better for your. It may or may not be better for you, it is just to appeal to nature to imply it is better, is a fallacy. There are plenty of natural things that the natural that are bad for us, so you can see to appeal to nature is flawed. Arsenic is a natural substance and it is certainly not good for you. The reason it is coming up is that ‘natural running’ is being widely promoted as being good as its ‘natural’ which is the fallacy.

May 12, 2013 Uncategorized Comments Off on The ‘Overpronation’ Issue

This is one of those topic that is so nonsensical but it still consumes a lot of time to deal with all the myths. I first blogged about it here and more recently here. I still do not get why so many do not get it and so many think they are experts it in. Overpronation is no necessarily a problem – it is a problem if it contributes to the load in the tissues that is causing an injury. There are a zillion different causes of overpronation, so there is not one size fits all when it comes to treating it. This leads to so many myths and so much mistreatment of it. The issues surrounding the understanding of overpronation do not seem to be getting better, but getting worse! There is so much more work to be done and education to be undertaken. Pronation mythbusting never stops!

May 7, 2013 Uncategorized Comments Off on Continuing Professional Development (CPD)

This has always been an interest of mine and I have long been running many different courses of the years (including the Clinical Biomechanics Boot Camp in 7 different countries so far!). I have also been very opinionated in my views on it as I don’t think most of it works like it is supposed to. Most CPD systems fro professionals around the world are based on the number of points or hours that are accumulated. This sounds good on the surface, but the problem with it is that it is not guarantee that learning or a change in behavior has actually taken place (which is the point of CPD!). The aim should not be to measure the input (ie points or hours), but to measure output (ie how much learning took place). In the online CPD program that I run, that is exactly what we do. Patients or students or clients don’t care how many hours you spend at conferences, they care about the learning you have to help their problem and improve them.

What Happened to Toning Shoes

January 5, 2013 Uncategorized Comments Off on What Happened to Toning Shoes

Toning or fitness shoes are considered to those shoes that are manufactured unstable with designs such as ‘wobble boards’ or a rocker bottom shoe. The purpose of this design is to create an instability problem so that the muscles of the legs have to work harder to compensate. As a consequence it is alleged that this give an additional workout or ‘tone up’ when using the footwear. That is how the shoes got the name ‘toning’. This niche of the market was originally made popular by the MBT (Masai Barefoot Technology) footwear and then followed later by the Skechers Shape Ups and The Reebok Easy Tone shoes.

What typified the toning shoes niche initially were the highly exaggerated and hyped up statements that were made for the benefits of the muscles working harder due to the unstable design of the shoes. There were advertisements that the shoes could give you a better toned up ‘butt’ as a result of wearing the shoes. There were claims that the extra muscular work could help you lose additional weight when you exercised and there were even bizarre claims that these shoes could help solve to the obesity epidemic if everyone started wearing them! There were claims about how they could improve the blood circulation as well as varicose veins. Endorsements were given by a number of celebrities which also helped hype up the benefit of these shoes.

The Federal Trade Commission (FTC) in the USA as well as the American Council of Fitness (ACE) took a much closer look at the claims being made. Firstly the ACE did a well designed study to test the claims and they found none of them to be supported by the evidence. The study found there was no increase in muscle activity while using the shoes and also there was no increased expenditure of calories when using them compared to a conventional running shoe. However, other studies have found minor changes in muscle activity while some others have not found any differences when using the shoes. The scientific evidence did not support what the marketing hype was claiming. Both Skechers and Reebok were investigated by the FTC for the claims and both companies agreed a multi-million dollar settlement.

I am not sure where the toning shoe sector will head now after all this. The shoes do possibly have some uses in some clinical conditions. For example, like a number of other clinicians, I see them being useful things like painful hallux rigidus. Some Chiropractors are trialling them in people with chronic postural and low back problems due to the slight change that they create in the gait. Some athletes may also get a benefit from them with occasional use in order to use the lower limb muscles in a different way for short periods of time.